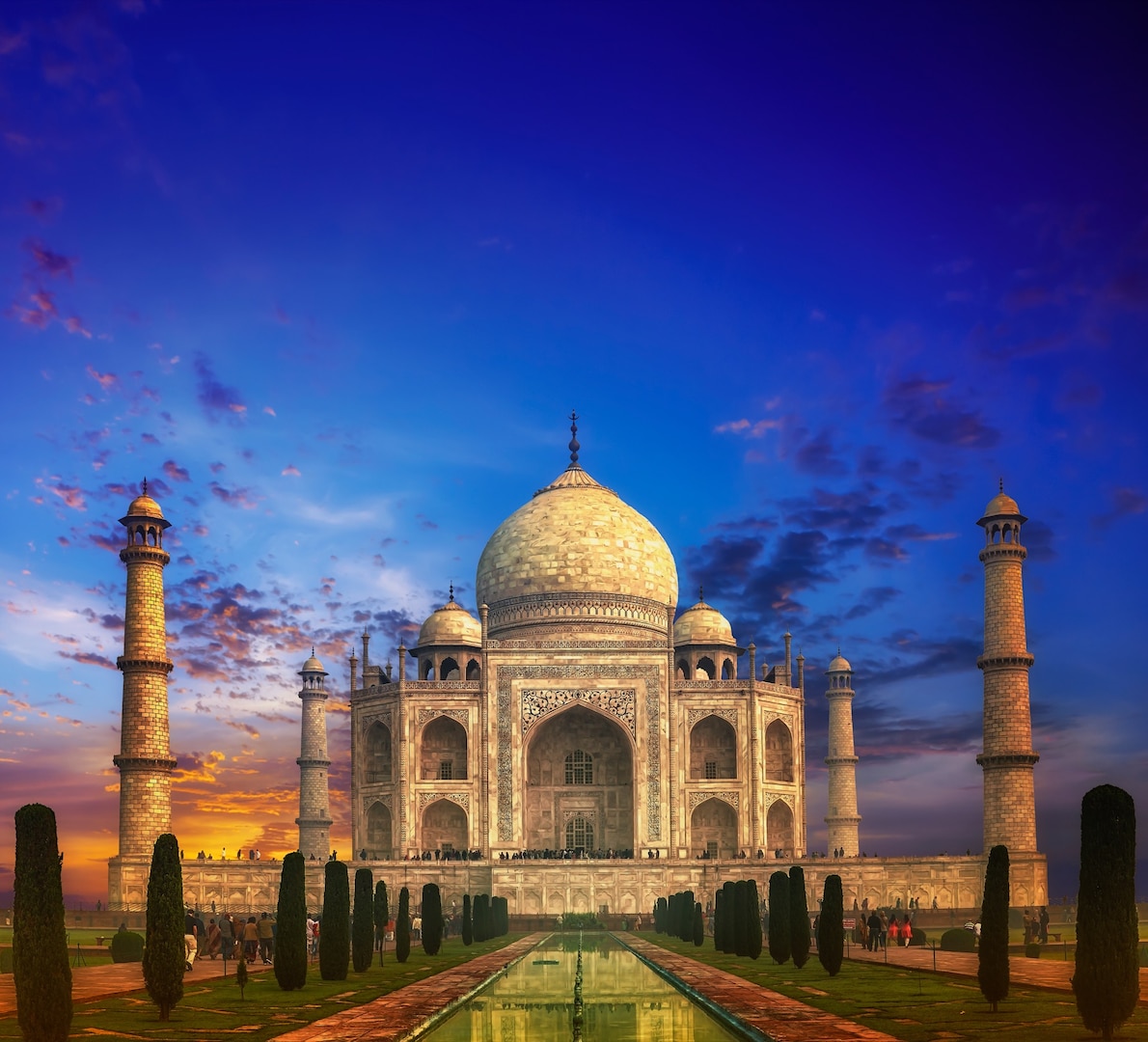 “...let this one teardrop, this Taj Mahal, glisten spotlessly bright on the cheek of time, forever and ever.” - Rabindranath Tagore Taj Mahal is...

“...let this one teardrop, this Taj Mahal, glisten spotlessly bright on the cheek of time, forever and ever.”
- Rabindranath Tagore
Taj Mahal is a world famous monument of true love which makes it a favourite romantic destination. Because of Taj, Agra is popularly called as ‘City of love’. One of the Seven Wonders of the World, Taj Palace was built by Emperor Shahjahan in memory of his beloved wife Mumtaz Mahal who died in 1631. Made in white marble, it is the finest example of Mughal architecture showing influences of Islamic, Persian and Indian styles. Construction started in 1631 CE and the main monument was completed in 1648 CE. The gardens and outlying buildings were finished five years later in 1653 CE. In total it took 22 years to create this marvellous tomb.
In 1983, it became a UNESCO World Heritage Site and was referred as “the jewel of Muslim art in India’’. It stands grandly by the banks of river Yamuna. The white marble was brought from Makrana in Rajasthan. Semi-precious stones used for interior decor were sourced from all over India , Afghanistan and Ceylon. The monument is situated in the centre of the Mughal garden. A beautiful reflection of the tomb can be seen in the raised marble water tank at the centre of the garden. The mausoleum showcases its beauty by displaying different shades of colours. It is pinkish in early morning, milky white in the evening and golden when the moon shines at night.
According to historians, about twenty thousand workers were recruited from across the Northern India. Calligraphers from Syria and Persia, sculptors from Bukhara, a specialist in building turrets, stone cutters from Baluchistan, another artist who carved only marble flowers, were part of the creative unit consisting of thirty-seven men. The Taj is not just an epitome of love or beauty, it is also a symbol of hard work and great craftsmanship.
You must go there if you’re a die-hard romantic person. The love story of Shahjahan-Mumtaz will inspire you to fall in love. The beautiful gardens, sparkling fountains and the reflecting pools create a perfect ambience for lovers. If you are not a big fan of love stories then just go there and admire the timeless white marble wonder.
Bollywood Connect: Some scenes of popular movies like Bunty Aur Babli and Namastey London were shot here. Romantic songs like Kaisha Ye Ishq Hai from Mere Brother Ki Dulhan and Suno na Sangmarmar from Youngistan were also picturised here.
Visiting Time: Sunrise to Sunset
Open all days. (Closed on Friday)
Entrance Fee:
For Indians: Rs. 20
Foreign Tourists: Rs. 750

Basic Entry Fee: Rs 50/- (Domestic/Indian/OCI cardholder) Rs 1100/- (Foreign Tourists) Rs 540/- (Citizens of SAARC and BIMSTEC Countries) Entry will be free for children below the age of 15 years. If anyone wants to visit the main mausoleum then Rs 200/- will be charged extra. There will be an additional discount of Rs.5/- (Indians) & Rs. 50/- (foreigners) for online bookings.