The National Zoological Park, originally called as Delhi Zoo is a 176 acre zoo situated near the Old Fort in New Delhi.

The National Zoological Park, originally called as Delhi Zoo is a 176 acre zoo situated near the Old Fort in New Delhi. It was inaugurated on 1st November 1956 with the vision of becoming a model for other zoos in India. The zoo is home to about 1350 animals comprising almost 130 species of animals and birds from around the world. Here, the animals are provided the kind of environment which is close to their natural habitat.

Various kind of animals like leopard, giraffe, Gir lion, chimpanzees, hyenas, hippopotamus, African Wild Buffalo and zebras can be seen in the zoo. Also, the zoo has an underground reptile house which is home to reptiles like the Marsh Crocodile, Gharial, Indian Cobra, Indian Star Tortoise and the Indian Sand Boa. The zoo also has numerous species of birds like Emu, Sarus Crane, Peafowl, Grey Hornbill and the Barn Owl. “Only to be booked if you don't any any other option. The charges are equivalent to some 5 star ...” 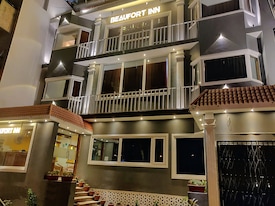 All Hotels near Delhi Zoo