The monument is located in the heart of the Pink City, Jaipur. It was built by the founder...

The monument is located in the heart of the Pink City, Jaipur. It was built by the founder of the city Maharaja Sawai Jai Singh II around 1729-1732 CE. The King ruled in Amer and built and planned the outer walls of the palace. Later rulers also added to the architecture of this palace. As per speculations, these additions have taken place up to the 20th century. The palace is located towards the northeast side of central Jaipur and has many buildings and courtyards. There’s another castle at the entrance of the City Palace known as Mubarak Mahal that means the fort of reception or welcome. It was built by Maharaja Sawai Madho Singh in the 19th century and was used as a reception centre for the visiting personage. As of now, it has been named as the Maharaja Sawai Man Singh II Museum that displays royal antiques and exquisite collection of regal costumes.

Its architecture portrays a beautiful amalgamation of Rajput, Mughal and European styles. Some of the famous gates used as entrance to the palace are the Udai Pol, Virendra Pol and Tripolia Gate, all of them decorated opulently. If you are a history lover and have keen interest in architectural designs and patterns then City Palace is the perfect place for you. 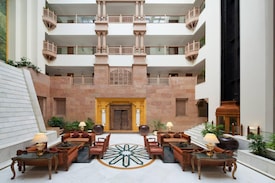