The fort was built by Maharaja Sawai Jai Singh II in 1734 CE and was renovated by Sawai Ram Singh in...

The fort was built by Maharaja Sawai Jai Singh II in 1734 CE and was renovated by Sawai Ram Singh in 1868. Along with Jaigarh Fort and Amer Fort, it once formed a strong defence for Jaipur. It was build on the edge of the Aravali Hills from where you can enjoy a breathtaking view of the city. As per speculations, this castle was originally named as Sudarshangarh Fort, later it was renamed as Nahargarh meaning ‘abode of tigers’. According to local legend the construction of the palace was hindered by the spirit of a prince Nahar Singh Bhomia who demanded that the fort should be named after him.

Another attraction within the castle is Madhavendra Bhawan which was built by Sawai Madho Singh for the royal family members. Just above the entrance you’ll come across Durg Cafeteria where you can have meals and refreshments. Padao Restaurant is another place to hangout which sells drinks at sunset. 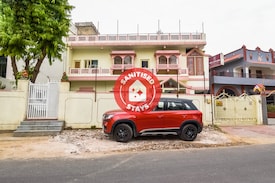 “Well, nothing to say”

All Hotels near Nahargarh Fort