Munnar is situated on the Western Ghats in the Indian State of Kerala. It is a tiny hill-station and a popular honeymoon destination of the country. This beautiful town is situated on the banks of three rivers &ndash; Kundala, Mudrapuzha, and Nallathanni.
The popular tourist attractions include Eravikulam National Park, Anamudi Peak, Mattupetty Dam, Pallivasal, Top Station, Tea Museum, Pallivasal Falls, Echo Point, Chinnakanal and Anayirankal. The best time to visit Munnar is in the months of October and November and from the months between January and March.
Read More Read Less
City Weather

Places to visit and things to do in Munnar 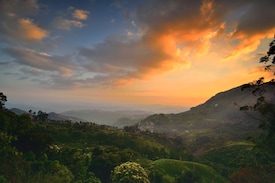 6
Pothamedu Viewpoint
All Attractions of Munnar

How to Reach Munnar

Beautifully cuddled on the lap of Western Ghats, Munnar is one of the easy escapes for weekenders as well as nature lovers anytime round the year. The meandering paths settling down at the plains connects Munnar tourism to all other major cities in South India by a well knit of state highways and national highways. How to reach Munnar is not a matter of hustle and bustle as it can be easily access by road from nearby cities and tourist destinations. The distance from Cochin to Munnar is approximately 126kms whereas from Kozhikode to Munnar is 270kms. One planning to drive from Coimbatore to Munnar needs to pelt along national highway 69 followed by national highway 209 that covers a distance of 160kms. The approximate distance from Wayanad to Munnar is 340kms whereas from Alleppeye it is only 170kms. If you are planning a drive from Mysore, then you need to cover a distance of 340kms en route Coimbatore and one who is planning to drive from Madurai has to cover 155kms. Thus Munnar by road can be easily accessible as daily buses and cabs plies from these cities and destinations.

The Cochin International Airport is the nearest airport from Munnar that connects Munnar by air to all other parts of the world. Hence wherever you are you need to a book a flight to Cochin and hire a cab to Munnar. “Be prepared to be isolated from all amenities and subjected to overpriced transport costs to reach ...” “If by any chance you can contact the palace and tell them to alot you the room 201 then you are up ...” “Make it a point to reserve half day to explore hotel surroundings...” “This is not a resort if you are not taking a cottage. Service was good but food is not. Dont opt ...” All Hotels in Munnar Best Resorts near Coffee and Spice Plantation in Munnar Munnar Search Question
Didn't find your answer? Ask a Question!
I am planning to visit munnar on September 2020?? do I have to get epass and what are the other supporting docs??

VARGHESE Answered 1 hours ago
Upvote
See All 2 Answers
I need hotel 12th May to 14th May. Please suggest some best hotels.

Re-Ask Answer
Dear Guest, Greetings from The Silver Tips Munnar !!! Please book "The Silvertips" for your stay at Munnar. We hope to see you during your next stay in Munnar. Regards Tipster

Upvote
See All 51 Answers
sir which one is the cheep resort in munnar,nearest to munnar plz tell me.

Re-Ask Answer
Sir/Mam , If you go to cheaper hotel there will be no basic amenities and complimentry items . If you want cheapest hotel i suggest you to go to old munar there u can find

Re-Ask Answer
bike riding is very good option to visit munnar , but monsoon has come.. so this time u will find difficulty to visit from bike .