It is located on the Observatory hill, one of the seven hills of Shimla. One can walk ...

It is located on the Observatory hill, one of the seven hills of Shimla. One can walk through the lane to the left of the State Museum entrance that leads there in five minutes via Hotel Peterhoff. The building was constructed as a resident place for Lord Dufferin, the then Viceroy of India (1884-1888). The architecture was designed in the famous Jacobethan style depicting the English Renaissance revival and resembles the fictional Hogwarts School of Harry Potter.

Later it came to be known as Rashtrapati Niwas as it served as the summer retreat of the President of India. In the early 60’s the President Dr. S. Radhakrishnan and the Prime Minister Jawaharlal Nehru decided to make it a scholars’ abode. That’s when the research centre IIAS (Institute of Advanced Studies) moved into the lodge in 1965. The research subject comprises Indian culture, religion, humanities and social and natural sciences. The drawing room, ballroom and dining room was converted into a library, the Viceroy’s office became IIAS Director’s office and the conference hall became the seminar room for research scholars.

There is a museum located inside the institution that houses the photographs and the texts from the era of the British colonial rule. One of the famous alumni of this institute is Burmese Nobel Laureate Aung San Suu Kyi who stayed here as a research fellow for about two years from 1987-1989. 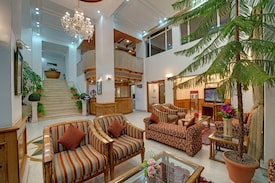 All Hotels near Viceregal Lodge